At the onset of resort

From the memoirs of writer Andrei Bely, 1930:

We have a magnificent veranda terrace; sea view; right after steps there is an alley of small cypress; On the side of the steep rock there is a Genoese fortress... 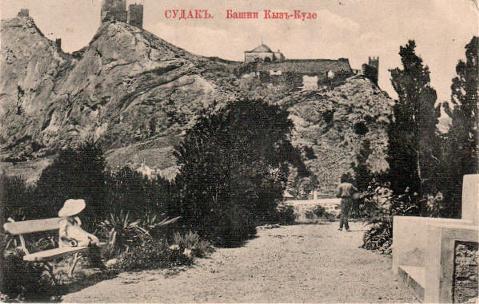 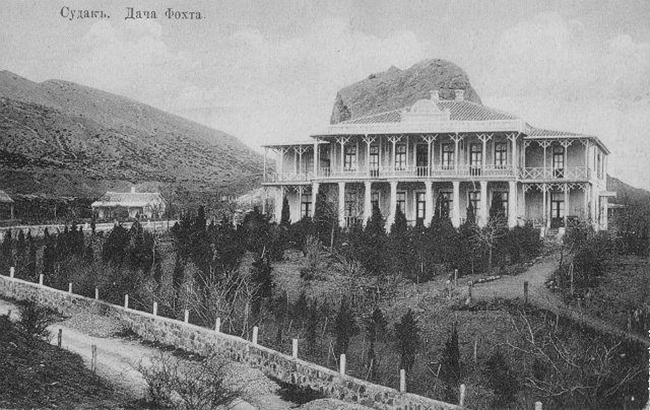 In the early twentieth century. In Sudak there was a contingent of tourists, "almost entirely intelligent public: professors, musicians, artists, teachers, doctors, lawyers, writers and officials."

In 1924, on the territory of the present TAHC Sudak in the summer residence of R. Focht, P. Skopnik, Kiselev, Rachinsky and others there was recreation center for the students of the Leningrad Military Medical and Military Engineering Academy (later Leningrad Military District). In the next year 1925, 473 people were hosted here.

In 1928-1937 the health resort was under the authority of Commission for the improvement of the life of students at the Lensovet. In the Commission rest writers Alexei Tolstoy and Vyacheslav Shishkov, who created novel "Wanderers" in Sudak. 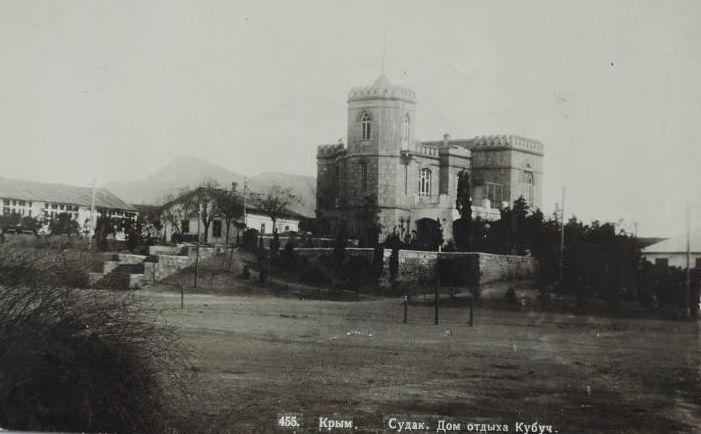 As time has gone on, the the health resort was given the name of A. Spendiarov, a famous Armenian composer. In the pre-war years, the health resort hosted participants in battles near Lake Khasan and Khalkhin-Gol.

In 1944, immediately after the liberation of the Crimea from the Nazi invaders, the State Planning Committee of the USSR decided to organize a holiday house in Sudak, which was recognized as "one of the priority objects of resort construction on the Eastern coast of the Crimea." The construction of a holiday home began in the coastal part of the Sudak Valley, where all buildings were destroyed during the war.

Without waiting for the end of the protracted construction, in 1948 they installed temporary summer houses and in August took the first 50 tourists. This date is officially considered the starting point in the history of the health resort. 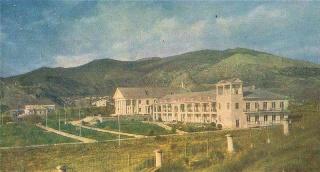 Construction of the first stage of the holiday house "Sudak" of the State Planning Committee of the USSR was completed in September 1948, the bedroom block No. 1 was put into operation for 30 people, the administrative building used as the sleeping building for 20 people, also a reception block, a director's house (for 12 persons), a kitchen-dining room, a laundry and bath, a movie theater, an office, warehouses, a metal fence with a gate, an outdoor water supply, sewerage and electric lighting, roads, stairs, sports grounds, etc. The agronomist of the holiday house was engaged in breaking up lawns and flower beds, protecting green plantations from cows and goats. The health resort had its own vineyards and fisheries. Fish was given to workers and comen to the kitchen of the dining room.

Vacationers observed the "Rules of the internal order of the southern holiday house" Sudak "of the State Planning Committee of the USSR, which, in particular, stated:

"Vacationers are categorically forbidden to keep weapons with them when they arrive at the holiday home. All kinds of weapons must be deposited with the administration of the holiday home immediately ... The Vacationers were also not allowed:

In January 1950, the rest house passed to the authority of the All-Union Central Council of Trade Unions. In 1954, two two-story buildings were built. The holiday home was already able to accommodate 250 tourists. 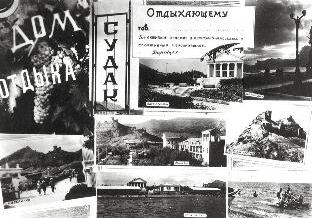 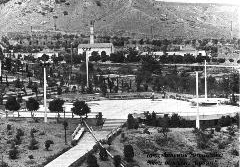 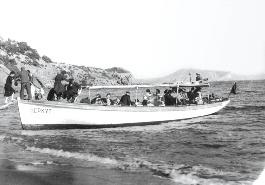 From 1955 to 1992, the rest house was part of the system of the Ministry of Medium Machine Building of the USSR. A high degree of secrecy, which existed in the atomic department, extended to the resort sector. The first seven years the health center had the official status of the "Mailbox". The staff was strongly advised not to communicate with vacationers, they had nothing to take an interest in, not to listen to their conversations. The residents of the closed cities of Sverdlovsk-44, Arzamas-16, Chelyabinsk, Krasnoyarsk-26 and 45, Tomsk-7, Bishkek, Chita, Krasnokamensk, Karakum, Leningrad, Moscow, Elektrostal and others rested in the recreation center "Sudak". 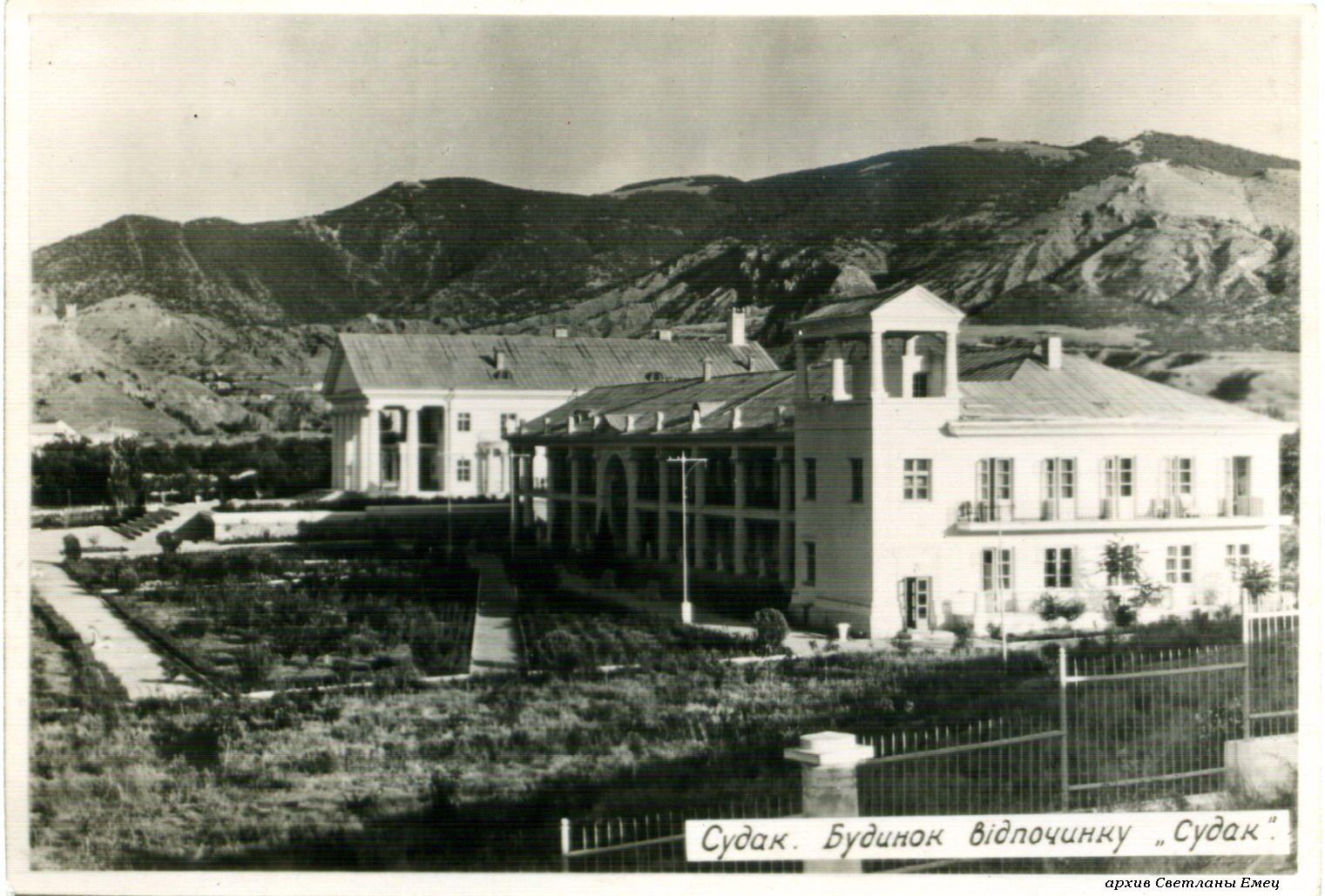 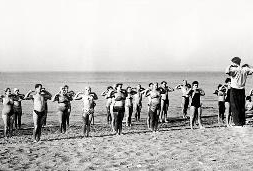 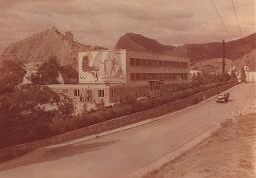 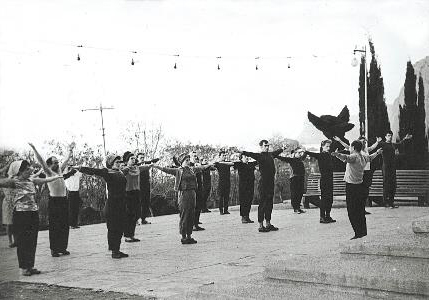 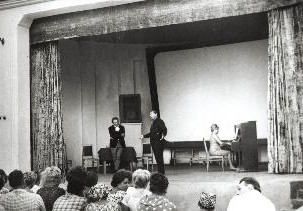 In the health resort, a construction was actively developed, new buildings, a summer dining room, a central boiler room were raised. From all over the country, aircraft delivered machinery, equipment, spare parts, furniture, utensils, inventory, books for the library. 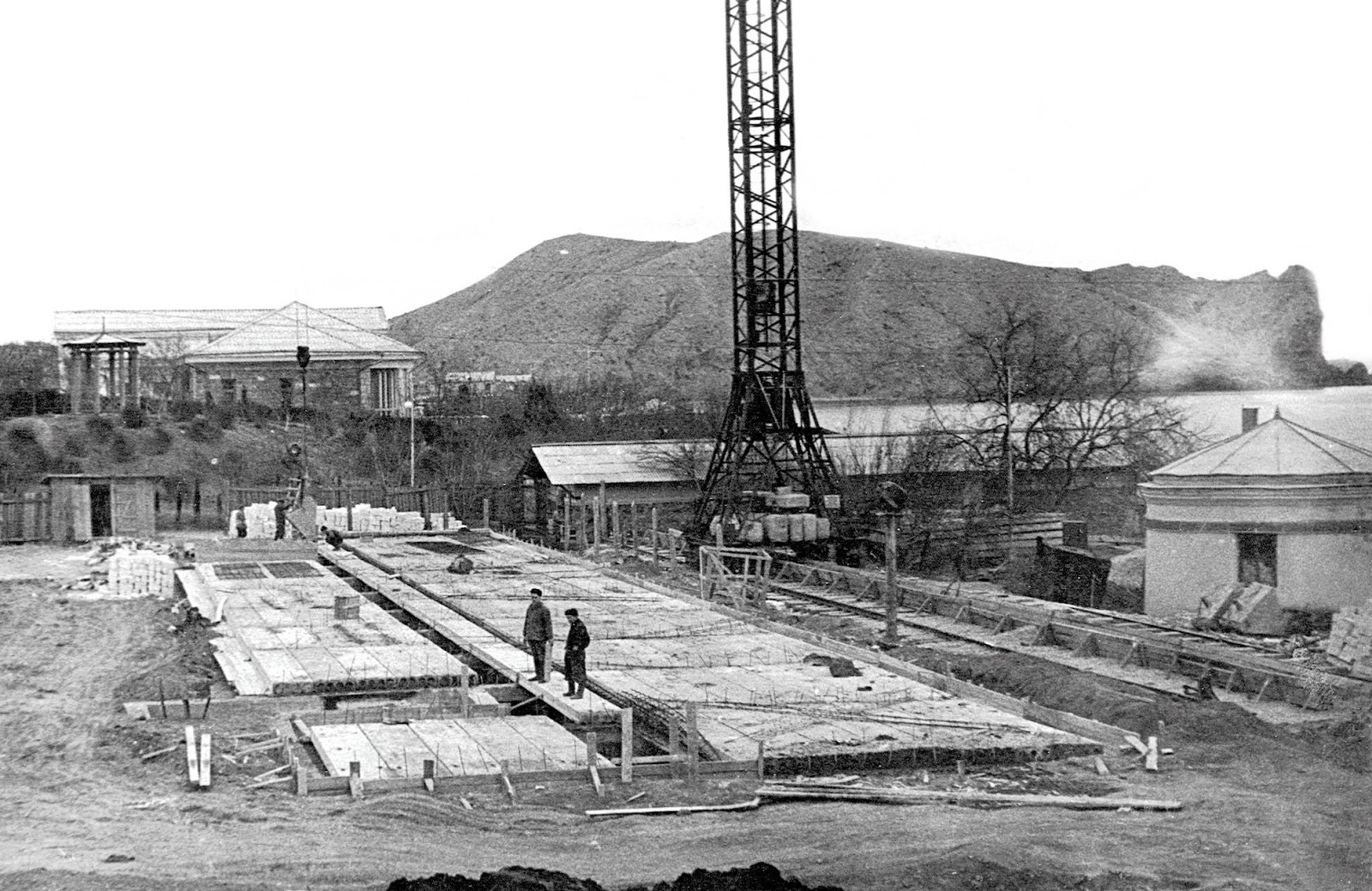 In the early 1970s, a 600-seat club was put into operation; Building number 2 with the transition to a dining room for 740 seats; A swimming pool with heated seawater and sports halls, sports grounds and tennis courts. Built solariums, two pavilions at the sea, a reconstruction of the bunder. 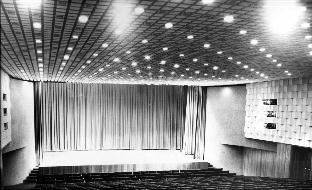 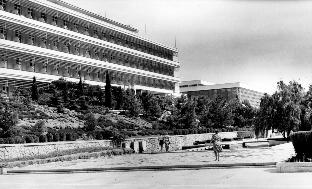 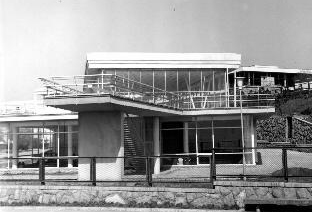 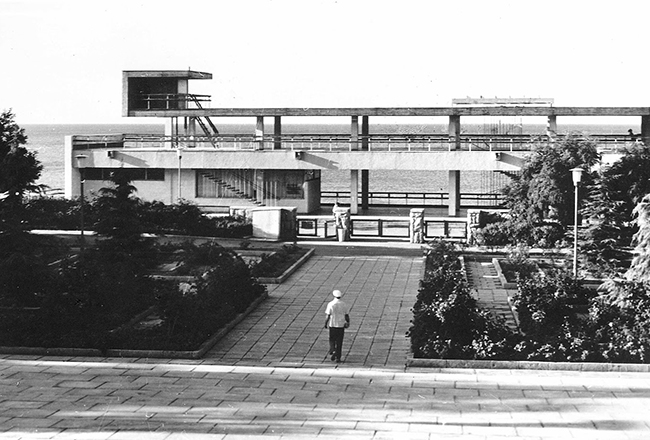 A special symbol of the health resort was the decorative bronze composition "The Abduction of Europe", presented to the rest home in 1970 by the Leningrad sculptor B.A. Svinin and installed in a decorative pool. The sculpture was exhibited in Leningrad, visited the exhibition in France, Germany. 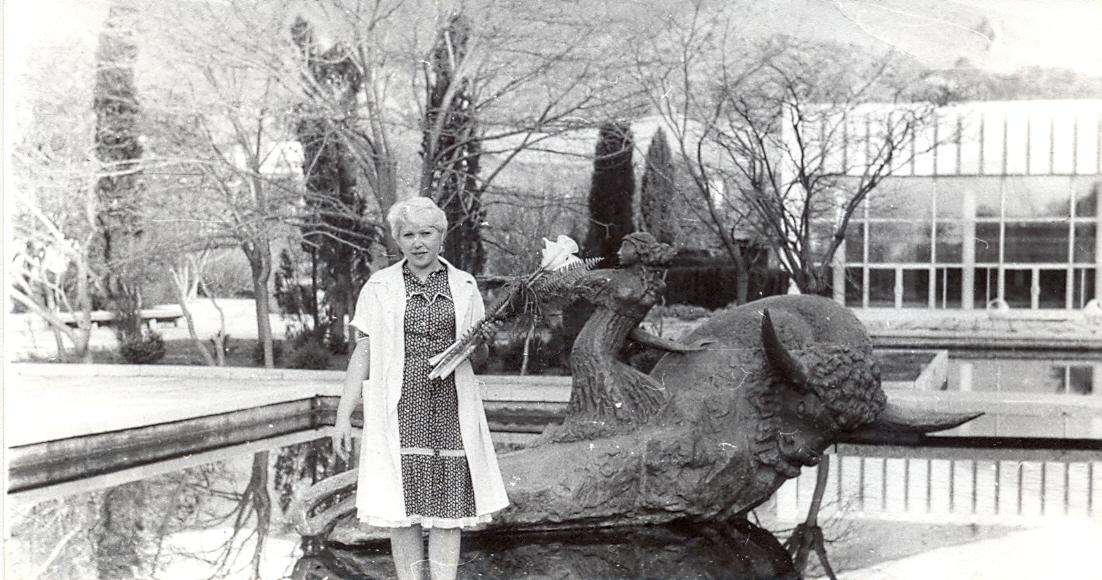 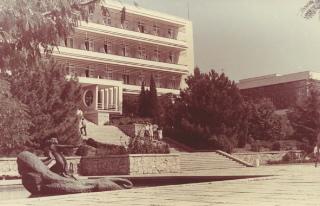 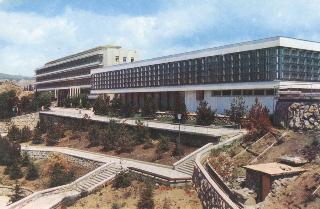 By the 30th anniversary of the holiday house an architectural ensemble was opened - a summer cinema for 1250 seats with a decorative pool and fountains decorated with Gasprin stone. Work continued on further improvement and greening of the park zone.

The beginning of the 1990s, because of the radical economic reforms taking place in the country and the closing up of state social programs, it was a tough time for the health resort. In 1992, the rest house was transferred to the republican property of the Crimea.

The revival of the health resort, which changed its status to publicly held corporation "OAO Tourism and Health Complex "Sudak" began in 1996. A clear strategy for the development of health resorts, a course for the complete reconstruction and modernization of the entire number of rooms, the repair of utility networks, the improvement of the territory, the creation of a modern diagnostic and treatment base facilitated the placing of the complex into a new orbit. 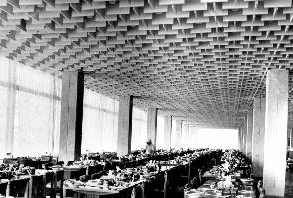 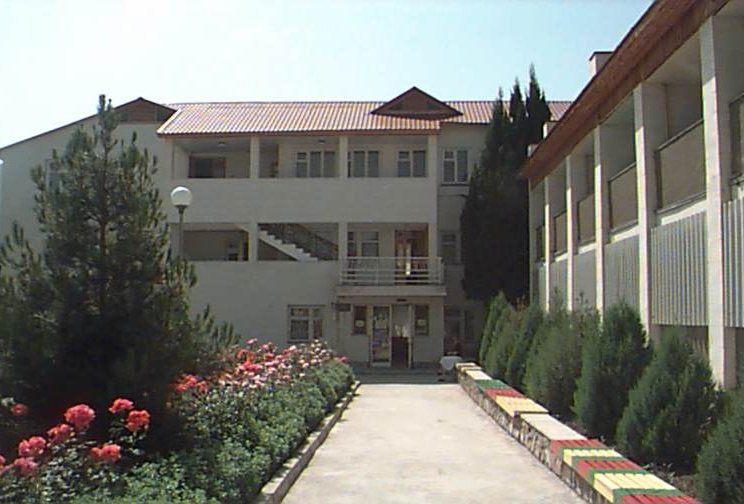 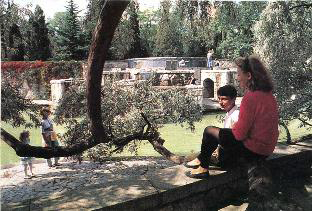 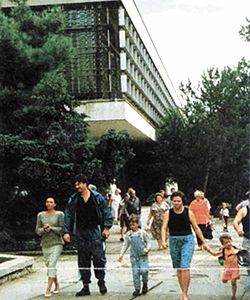 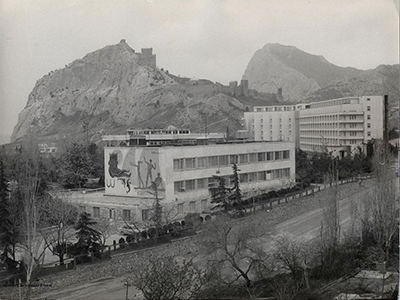 TAHC Sudak today is a modern popular prestigious health center, which operates all year round also a well-developed health-improving center, a well-known center for congress tourism.